Journey to the Center of Myself

Who the Hell is Frank Twerefuo? 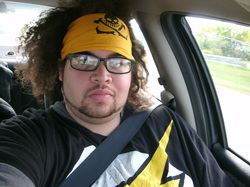 Me driving across the country to my new home in Los Angeles, CA.
I am. Ha! That was easy.
But on a serious note, I am Frank Twerefuo. I recently moved to Los Angeles to pursue the dream of acting. I'm a very laid back individual who enjoys reading, singing karaoke, watching Anime, going on adventures and trying new and unique things. I value friendship and family more than anything else in this world. It's rare that you'll find me in a bad mood, and I'm always trying to make my life and those around me better!  I decided to create this blog to so that I could share an adventure like no other. I'm going to dive headfirst into a journey to create a healthy me.

How I got Here

My road to now has been one of many curves, hills, and valleys. From a young age I turned to eating to comfort myself and created a habit that became my undoing. In elementary school I was the chubby awkward kid. The aspect of self image didn't dawn on me until I was in 7th grade. Up until then I was completely oblivious to important things like hygiene, grooming, and social norms. I always had my head in the clouds reading or playing video games. When middle school approached I got a rude awakening. Not only was my way of life unacceptable to other kids, it was insulting apparently, and they took the liberty to tease me for it. One person in particularly made me the focus of her torment until the early years of high school. During that time I tried to change myself to fit her liking but no matter how much I did, she found other traits to pick at. This is where my negative self image spawned and I went from chubby to fat. I hit 300 pounds, aided easily by my job in fast food, at the age of 15. My bully transferred schools halfway through my 9th grade year, but at that point it was too late. Food had become my best friend in a time when I had few. I actually managed to hover around 325 for my high school days but the voice in my head told me that there was no way I could ever weigh less. So I didn't try.
After the bully left, I was actually free to come out of my shell and express myself. I took interest in the arts and decided to become a teacher. Off to college I rushed where I took two years to gain another 100 pounds. I got a job in a call center and the money was good so I took a break from school. Sitting for 40 hours a week in front of a computer eating fast food every day for lunch and dinner caught up to me fast. The first shock was when I finally got a gym membership and tipped the scales at 435 pounds. I was still out of control with eating out with friends and not being as active as I needed to be. My dad opened my eyes a little more. In 2007 he had a debilitating stroke that completely paralyzed him on the right side of his body. If anything that should have been a warning to me because dad was an average sized man, but he smoked, had diabetes and high blood pressure but didn't take his medicine. He ignored his health and it took it's toll on him. I kept on walking down the path of destruction until two years later, Dad died of pancreatic cancer. It was very sudden. He started with stomach pains and in the 6 months it took for doctors to find the cancer, he had whittled down to nothing. A month after diagnosis he was gone. Watching him go like that was a splash of cold water to my brain. I became conscious of the foods I ate, my portion size, and how I was existing as an overweight individual. I tried to change myself. Once again though, after the initial shock of my father's passing, I went numb to the pain of addiction.
I hovered around the 430 mark, while cutting back on foods and making a minimal efforts to work out until 2010 when I got into a car wreck. In the ER they found a problem with my heart. I found out I have a right bundle block- a genetic defect where the lower right chamber in the heart randomly doesn't get the signal to beat due to a block in the electrical bundle that runs down each side of the heart. I had to see a heart specialist. In that month between the accident and the appointment I had lost 12 pounds through diet alone. I meet the doctor and he tells me that I am perfectly healthy except my weight. On the information sheet he gave me he wrote down one thing. Morbidly Obese. The word spooked me. I stared at the sheet and realized the different warnings my dad's actions and inactions sent to me. He was 54. I was 26. And I was heading down a road that I didn't like. So I made changes. But I never made goals. Old habits die hard. I was vegetarian and then Vegan. I managed to drop 30 pounds doing that. I leveled off after that and here I am now. 27 and still Morbidly Obese.

I am tired of being restricted. I can't buy clothes at normal stores. My thighs overflow into other seats at movie theaters and on airplanes. A flight of stairs leaves me winded. My back gets sore from sitting. I haven't been able to ride a roller coaster since 2001. It's embarrassing! There are so many reasons why I am not happy with my current body. Don't get it wrong, I love myself and who I am, but my size is getting in the way of true happiness. I want to look at myself in the mirror and not feel depressed or disgusted by what I see. I want to live to see age 60 without the assistance of machines and medicines. My goal in life is to make a huge positive impact on this planet and leave it better than I found it. I realized I'll be leaving a lot sooner than expected if I don't get myself on track. I will guarantee dedication with a promise that through all of this, I will become a better person. For my family and my friends, but most importantly for me. I hope that by seeing my progress bit by bit that I can continue and motivate myself to see this through till the end. Through an organized approach, broken down by goals and small steps, I believe I will be able to conquer this beast of my creation. I stepped it up and put myself in the spotlight on this one so that I have to produce results or face the ultimate let down of failure in the public eye. I hope others will draw inspiration from this. I want the world to watch as I make the journey from a satisfied MORBIDLY OBESE MAN to a happy MAN- no other adjectives needed. Stay tuned as I create my mission statement, set my goals, and begin my next big adventure to the big wide world of small!